Even though it seems rather impossible to put an exact time frame on when and how yoga originated and developed, scientists agree, that it must be at least a couple of thousand years old. Archeological findings proof, that yoga and the science and art of meditation must have been important enough as early as 4’000 years ago, to be the object of artistic endeavour and expression. Whether yoga – at that time – had already existed and had been practiced for hundreds or even thousands of years is still not certain. 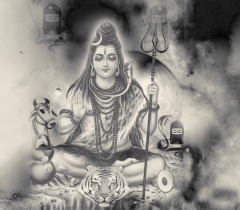 Maharishi Patanjali, author of the famous Yoga Sutras is referred to as the ‘father’ of yoga – but not the founder. Traditionally Lord Shiva is referred to as the source of the esoteric wisdom of yoga. According to the introduction of many Tantras, Agamas and other scriptures Lord Shiva taught this ancient science and art to his consort Parvati. His teachings were overheard by Matsyendra ‘king of the fishes’, who later – in human form – established Hatha Yoga on the basis of those teachings. ‘Father’ of the yoga teachings of devotion (Bhakti) and acting (Karma) is Lord Krishna.

Written records that evolved over a period of almost 4’000 years offer insight into the various techniques and sytems of yoga. Prior to that though, these methods almost certainly so, had been transmitted in oral form for a very long time. Some of the well known scriptures that refer to the yogic tradition or even teach such wisdom are the Vedas, the Upanishads, the Yoga Tantras, the Yoga Sutras of Patanjali, the Bhagavad Gita and more.